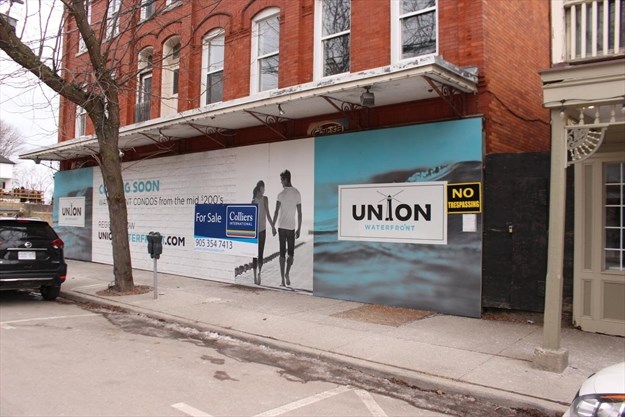 Tom Rankin says he likes to take on a challenge.

"The consensus is the tougher the jobs, the better we like them," says Rankin, CEO of St. Catharines-based Rankin Construction, speaking by phone Sunday from Palm Springs.

"We don't shy away from anything that's tough. I don't know what it is, it's just the way we are I guess, the company as a whole. We like challenges and when we look at Port Dalhousie, it's a hidden gem in St. Catharines, and they've had to put up with this for so many years, so there's a sympathetic viewpoint as well."

The $8.1-million deal will be finalized after Rankin returns to Niagara and signs the paperwork.

A developer and philanthropist with a long track record, including building Meridian Centre, Rankin said there were numerous reasons to take on the property at 16 Lock St. and 12 Lakeport Rd. in the heart of Port Dalhousie.

He said the development there will tie in with the Royal Port condo building his company is constructing nearby on the site of the former Royal Canadian Legion hall. That new building has 51 units, two of which are earmarked for the legion's new home.

Sales of Royal Port condos haven't been opened to the public at large yet, but Rankin said demand has been so strong a second building in the same area is needed.

Working in Port Dalhousie on the legion project also got the company thinking about how it could improve the area if it fixed up the Union Waterfront property.

"I don't think we would have got involved if we weren't involved in the Royal Port in Port Dalhousie, but now we're there we may as well," Rankin said.

"This would really open up the area and I think Port Dalhousie can be the place that it deserves to be."

Rankin said the property is an eyesore that people have had to endure for quite a number of years, along with all the hype about the property.

As well, it's meant lost revenue to the city in property taxes.

"This could be a big, big boost to the city in taxation dollars," he said. "These units won't be cheap and they're going to put more money in city coffers."

Rankin won't reveal what he has planned for the site in terms of storeys and units, saying he wants to negotiate with city planners first.

The property has been the subject of numerous schemes by different owners since 2004 when developers unveiled a 20-storey glass tower to city council, which later grew to 27 storeys.

It has a site-specific plan attached to it for a 17-storey tower with 80 units, a theatre and hotel that's been on the books since 2009 due to an approval by the Ontario Municipal Board.

When Fortress acquired the property in 2015, it wanted to change that plan to build a 14-storey mixed-use terraced building with 220 apartments. The application — it was panned and praised by the public — was awaiting a staff recommendation when the project went into receivership.

Rankin said he'll try to come up with the best plan possible so everybody's happy.

"We're hoping it will be a great compromise," he said. "Don't forget Port was an entity on its own, they had self-government and now they're part of the city, so we have to look at the city as a whole, the taxpayer as a whole as well as the people in Port Dalhousie. The majority of the people live beyond the boundaries of Port Dalhousie in St. Catharines and they all have an interest as well as the residents in that area."

Asked if it will take a local developer to get something built on a property with so much baggage, Rankin said he thinks so.

His company was confident it could build Meridian Centre on the old Welland Canal that had been covered over with 20 metres of fill despite concerns by some people. Rankin Construction drove more than 350 piles down 33 metres in the ground to bedrock to get the job done.

"Look at what the Meridian Centre has done for the city as a whole," Rankin said. "With a combination of the Meridian and the arts centre, St. Paul has been rejuvenated, and I think these projects in Port Dalhousie are going to rejuvenate Port.

"It's a hidden gem that hasn't reached its potential."

He said he's confident he can get something built. Other developers have said the same thing, but haven't produced results.

Rankin is keenly aware of the property's history, but says he's lived in St. Catharines for almost 60 years. He and his wife Elizabeth raised four children who married spouses from the city. He said he has the city's best interests at heart.

"St. Catharines is a great city and we just want to make it better," he said. "When you're a businessman you have to survive economically. You have to make a dollar, but we have a conscience. Lots of businessman don't, but we have a conscience, we think of the community and we want to do what's best for not only ourselves but for the community as a whole."

Rankin and his company are known for their philanthropy.

The company has sponsored the Rankin Cancer Run since its inception in 2006. Last year, the run had more than 14,000 participants and raised $1.165 million for local cancer supports.

To keep the Meridian Centre bid within the city's $45-million budget without sacrificing quality, Rankin donated the $2-million pedestrian bridge linking the facility to St. Paul Street in the downtown's core. The bridge was named Rankin Gateway to honour the donation.

When Friends of Laura Secord wanted to commemorate her trek for the 200th anniversary in 2013, they needed to get participants over a section of Twelve Mile Creek in Short Hills Provincial Park. A private unnamed donor paid for more than half the project and Rankin Construction donated engineering and technical services, materials, equipment and labour to build a suspension bridge.

Brock University's new main entrance at the base of Schmon Tower is called the Rankin Family Pavilion after a $2-million gift by Rankin in 2018. Niagara College renamed its technology department Rankin Technology Centre after it received $1 million in 2011.

Rankin said once the deal is closed for the Union Waterfront property, likely in early March, he'll set up a meeting with the city to try to hammer out a plan. He's hoping to have a plan city staff approves of within three months. He said it would then go to council and the public.

"We're going to do the best we can to make it a very viable project and hope everybody's happy when everything's said and done."